Why are we so out-of-tune?by Jeremy Epp 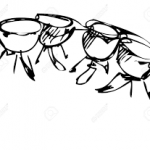 Good intonation is one of the pillars of musicianship for those of us who play pitched instruments. It’s also an area in which many timpanists struggle; it was one of the major issues which kept applicants from advancing at last year’s DSO timpani/percussion audition, and I’m certain that my colleagues would agree that it’s one one most persistent problems to pop up in timpani lessons and masterclasses.

At every level, timpanists’ intonation skills seem to lag behind those of our colleagues on other instruments, even as we play only a fraction of the notes they do. I’d like to discuss some of the reasons why timpanists may be at a disadvantage when it comes to playing in tune and some of the strategies I’ve found helpful in improving my own intonation skills.

First, a distinction: timpanists talk about having “clear” heads, and also about playing “in tune,” or “with good intonation.” “Clarity” refers to having even tension on the entire timpani head, achieved by adjusting (usually eight) tension rods around the drum. “Intonation” refers specifically to the pitch that sounds when the head is struck. While it is possible to have a clear head and still play out-of-tune, it’s difficult to sound in tune if a head is not reasonably clear. For the purpose of this post, we’re going to assume clear heads and focus on intonation.

Why are intonation issues more prevalent among timpanists than other instrumentalists?

I have two theories:

Physics. Here’s the extremely short version: Every string, wind, and brass instrument’s sound contains a predictable series of harmonic overtones that stack up on top of the note, or fundamental tone, the listener ultimately perceives as being played. (The relative strength of each of these overtones is, in large part, what enables us to distinguish the difference between identical notes played on, for example, a cello and a bassoon.) Our ears identify this naturally-occurring overtone series and focus on the fundamental pitch. To the trained ears of musicians, these overtones are keys to playing in tune.

Timpani, and other instruments with circular membranes, don’t vibrate in the same way, and instead produce an inharmonic overtone series – one that doesn’t align with the series our colleagues are producing. Luckily, the spot in which most of us have been taught to strike the drum produces a series of overtones that is close to the mathematically and aurally satisfying harmonic overtones we’re used to. Still, it’s a narrower band of overtones – the sounding pitch on timpani isn’t as isolated from all of its overtones as is the fundamental pitch produced on other instruments – and it isn’t an exact replica of the naturally-occurring harmonic overtone series. (Thanks to Richard K. Jones of the Omaha Symphony for his work on this subject, and his guidance in helping me understand it a bit better. For those of you who are interested in diving further into this topic, please visit his website.)

So it’s possible that it is, in fact, harder to hear intonation on timpani than on other instruments. Indeed, I’ve witnessed musicians whose sense of intonation I trust struggle with evaluating timpani intonation.

But even if this is true, it isn’t an excuse to play out-of-tune! Even by appealing to science, we’re not likely to get any sympathy from other instrumentalists who may play literally hundreds more notes than we do in a given piece and still manage to post a significantly higher “in tune” percentage.

If you’re not sure you completely understand the science behind all of this, don’t worry; there will not be a test. Besides, I feel there’s a bigger, more obvious reason many timpanists have a hard time with intonation:

Practice. Or, more specifically, a lack thereof. Most timpanists spend only a small portion of their practice time concerned with intonation. Perhaps we take a minute to check our tuning gauges, to tune for a specific etude or excerpt, or to recheck intonation when something sounds strange on a recording playback, but it’s common for tuning to exist as an activity isolated from playing timpani. It’s probably reasonable to assume that for every hour of practicing a college timpanist does, they neglect to think about intonation for at least 50 minutes, and if you add the hours spent practicing unpitched percussion instruments, that ratio gets even worse.

As evidence in support of this theory, I’ll offer my own experience: since I started performing on calf heads three years ago, I’ve been progressively more pleased with my intonation in recordings of myself. Unlike plastic heads, which generally don’t fluctuate in pitch, calf is extremely sensitive to humidity and temperature conditions and pitch can change within a matter of seconds. Playing on calf demands the same constant attentiveness to pitch from the timpanist that the majority of our colleagues deal with every time they pick up their instrument. Simply by forcing me to devote attention to pitch at all times, playing on calf has resulted in my sense of intonation improving. 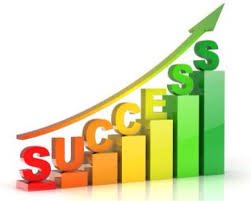 While instructing everyone to practice exclusively on calf heads would almost certainly raise the level of timpani intonation, that’s neither practical nor economical. With that off the table, here are some easily implemented ideas for improving intonation skills.

Record yourself. It’s always easier to identify problems from an outside perspective, and checking intonation is no exception. Be extremely critical in listening to yourself, whether in private practice or in ensemble settings.

Disengage your gauge. I credit my junior high school band program for helping me develop a baseline level of intonation skills. As a beginning percussionist, I played exclusively on a set of old timpani with broken gauges. I had to tune by ear. Gauges are extremely useful and I rely on them frequently in performance, but they can easily become a crutch preventing one from developing their ear. Spend more time practicing without using gauges. They are easily disabled, depending on your instruments, by either turning your fine-tuners or adjusting the pointer to render the indices inaccurate, or simply by covering the gauges.

Sing. Audibly sing the pitches to be tuned before tuning them. Doing so in the practice room will make it easier to “hear” intervals and pitches in your head when you aren’t able to sing out loud. Utilize a tuner to make sure you’re singing the pitches accurately and to start identifying tendencies you may have that may lead to poor intonation.

Make intonation etudes part of your practice routine. I’ve found the tuning exercises in both The Complete Timpani Method by Alfred Friese & Alexander Lepak and Tim Adams’ 75 Tuning Etudes for the Accomplished Timpanist invaluable, especially when used alongside the other ideas presented here.

Use a tuner. The tuner should be used to calibrate your ear, not to replace it; you shouldn’t tune using the tuner, but use it to check the work you’ve already done. Not all tuners work well with timpani (probably owing to those inharmonic overtones), but there are some that are reliable if your heads are reasonably clear. I’ve used the Cleartune app with success.

The routine I’ve found helpful works like this: Using a tuning fork as a reference pitch, tune all of the drums to the desired pitches (either the pitches needed for the next thing to be practiced, or a random combination of pitches as a standalone exercise). Check each pitch against the tuner, and note if/where you’re not in tune. If any pitches aren’t in tune, detune and START OVER with your tuning fork. Keep track of any tendencies you may discover (i.e. “I frequently tune minor 3rds too narrow,” etc.) so that you can address them by making the appropriate corrections.

Never allow yourself to practice playing out of tune. Whatever your method for checking your pitches (tuner, self-recording, a nearby keyboard instrument), make sure that all of your practice is done on accurately tuned timpani. Practicing out-of-tune is training your ears to be indifferent at best, and to hear things incorrectly at worst.

Build confidence. It’s important to keep checking yourself as your intonation improves and to hear yourself playing in tune. A lack of confidence can be an intonation killer; distrusting your own ear makes it extremely difficult to make good judgments in performance, leading to second-guessing and slow or inaccurate tuning. As you become more secure in your abilities, your tuning will become quicker and more decisive.

The way our instrument works can lead us to separate intonation from performance: we tune first, and then we play. In reality, we must be fighting for good intonation anytime we’re at our instrument like the rest of our colleagues do. Our ears must stay open, actively listening for pitch in the same way they do for other aspects of ensemble playing. It’s unlikely that we can ever get to a point where our intonation becomes flawless, but by developing our listening skills we can make the appropriate corrections quickly and accurately.

Always be ready to adjust. Expect to have to adjust. The more you hone your intonation skills, the more easily you’ll be able to listen and react to everything going on around you, increasing your ability to positively contribute to your ensemble’s performances.• 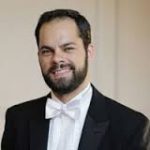 Jeremy has made appearances with several North American orchestras as Guest Principal Timpanist, notably the Chicago Symphony Orchestra, the San Francisco Symphony, the National Symphony Orchestra, and the Minnesota Orchestra among others. He can be heard on several Detroit Symphony Orchestra recordings, including complete cycles of the symphonies of Tchaikovsky and Brahms under the direction of Leonard Slatkin, recently released on the DSO’s own Live from Orchestra Hall label.

A native of Winnipeg, Manitoba, Jeremy studied extensively with Jauvon Gilliam while serving as a regular extra musician with the Winnipeg Symphony Orchestra. In the years leading up to his first orchestral appointment, he attended the Cleveland Institute of Music, where his teachers were Cleveland Orchestra principal musicians Paul Yancich and Richard Weiner. Jeremy has taken part in coachings and masterclasses with several other prominent timpanists, including David Herbert, Mark Yancich, Timothy Adams, and Dean Borghesani.

During the summer months, Jeremy’s engagements have included serving as Principal Timpanist of the Strings Music Festival Orchestra, the Youth Orchestra of the Americas, the National Repertory Orchestra, and the Bear Valley Festival Orchestra. He has also studied and performed at the Aspen Music Festival and served as a performing faculty member for the Traveling Notes music festivals held in Armenia and the Republic of Georgia.

Jeremy has been an instructor at the University of Manitoba and gives lessons, coachings, clinics, and masterclasses internationally.