Years of snare research and development brings us to the conclusion that runs contrary to the traditional concept of snare functionality. By questioning everything believed to be true about snare response, we unearthed the shocking truth:

Just because you play at the edge of the top (batter) head, does NOT mean that the bottom (snare) head will vibrate at the edge. The fact is that the sound produced by snares comes from the center sector of the bottom head.

Think of it this way, you would not jump at the edge of a trampoline. That’s because most of the movement and energy comes from the center section of the trampoline’s surface.

So, while playing softly at the edge of the top head makes sense because the TOP head vibrates less, it does not mean that the bottom head is vibrating at the edge directly below!

“So, let’s talk about why Grover Pro’s snares perform better and give you more control. 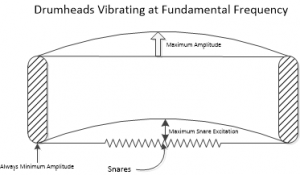 Don’t be too upset. Approach this concept with an open mind,…but, don’t take our word for it…try Grover Pro snares and listen for yourself!