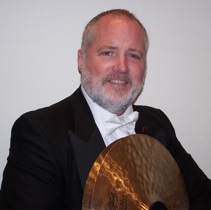 Steve earned his bachelor’s of music degree in percussion performance with Michael Rosen at the Oberlin Conservatory of Music, and his master’s of music as a graduate teaching assistant to John Beck at the Eastman School of Music. While at Oberlin, Steve soloed with the Oberlin Chamber Orchestra, the Oberlin Wind Ensemble, and the Oberlin Percussion Group, and he won the school’s concerto competition performing Robert Kurka’s Concerto for Marimba and Orchestra. He was also inducted into the honorary music fraternity Pi Kappa Lambda.

In the German press, Steve has been hailed as a “drum wonder,” “master drummer,” and “extraterrestrial” following performances of his piece “F/X” for solo snare drum.

His compositions for solo marimba: “Sweet East,” “Arctic,” “That Good Night,” “A Love Most True,” “Miles to Go Before I Sleep,” and “The Winds of Saturn,” and his pieces “Streams” for percussion trio, and “Fantastic Night” for multiple percussion solo, have been published by Whole>Sum Productions (distributed solely by C. Alan Publications). His piece for solo timpani with multiple percussion, “Lament and Recitative,” has been published by Zimmerman Music Publishers in Frankfurt, Germany.

Since 1993, Steve has played as a founding member of the Kalamazoo Percussion Trio in Hannover, Germany. Kalamazoo has been on the faculty of the “Festival junger Kuenstler” in Bayreuth since 1999. The group’s second CD is in the planning stages and will feature Steve’s composition “Streams – In Memoriam Thomas Mann.” Kalamazoo’s self-titled first CD on the CordAria label contains his work “Over the Edge.”

Steve has been a regular guest with the Radio Philharmonie Hannover des NDR, and the Hannover Pops Orchestra, with which he has performed and/or toured with such stars as Ray Charles, Al Jarreau, Bobby McFerrin, Randy Crawford, and Patricia Kaas. Steve has also performed numerous times at the World’s Fair (Expo 2000) in Hannover, Germany.

He has written two books for drum: Fantastic Feet–Stepping Outside the Box and Fantastic Feet 2–The Footnotes, the first of which is with Mel Bay Publications (2010). In addition to joining the Grover roster, Steve is a Vic Firth drum stick artist and a member of the Vic Firth educational team and has been a Zildjian artist since 1995.