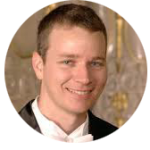 We have just received the endorsement of Jeremy Branson, Associate Principal Percussionist of the Pittsburgh Symphony Orchestra.  Prior to his appointment in the Pittsburgh Symphony, Branson was a member of the New World Symphony in Miami Beach, Florida, under the direction of Michael Tilson Thomas. During that time he also played regularly with the Philadelphia Orchestra.

When not performing Branson enjoys high adrenaline sports.  As of 2015, he holds two world records in wingsuit skydiving in addition to several national records.  He also can be found on the ski slopes in the Rockies during the winter whenever he has a few free days.  Branson is also an avid endurance runner.

Branson is the chair of the Percussion Department at Carnegie Mellon University.