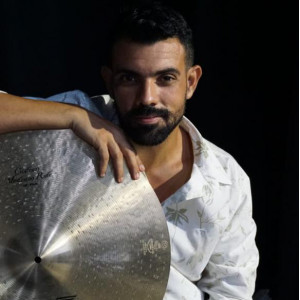 Leo Rodriguez, son of a musician, was born on May 13, 1986 in Jacareí. He has always had direct contact with music, drums and great musicians who have always been part of his environment. His great influence was his father Amaury Rodrigues who always supported him and was his great mirror. He grew up in the church where he had the opportunity to play, having that as a very special musical cradle. He also started to perform as a percussionist in many works. Versatility is one of its main additions.

Early on, he began to demonstrate ease in different styles, giving rise to opportunities to play with musicians from the most varied musical genres. With that, his name and his musicality took shape to the point where he began to consistently play with great musicians.

In 2008 he was the drummer for gospel singer and songwriter Bianca Toledo, playing alongside great musicians such as Glaubert Cantuária, Fred Tavares, Calebe Barros, Joe Medrano. After that, he was invited to join the band of singer Leandro Zambianchi.

His immense passion for teaching has formed many musicians over the years. Leo has taught in some musical institutions as a drummer and percussionist. “Adding to peoples’ lives and sharing their experiences is indeed a privilege”, says Leo. He also conducts workshops, clinics for the art of drumming and percussion, sharing the responsibility of honoring this fascinating instrument and its beautiful ways of playing it.